“What a miracle it is that out of these small, flat, rigid squares of paper unfolds world after world after world, worlds that sing to you, comfort and quiet or excite you. Books help us understand who we are and how we are to behave. They show us what community and friendship mean; they show us how to live and die.” — Anne Lamott

Like many of you, one of my deepest passions is to enter into, as Ms. Lamott imagines, “worlds that sing to you.” That was as an avid reader.

Now, as I venture into the land of agents, editors and publishers, I invite you to join me on this journey, as we support one another through networking, stories, reviews, support, even trivia, and making elusive dreams materialize. Debut authors most welcome!

Though I enjoy a hearty mystery, modern fiction, and all varieties of non-fiction, fondest for me is literary historical fiction, casting time as if a character itself, such as the way Sue Monk Kidd portrays slave storytelling on quilts. I find the omnipresence of setting and time to be on equal footing as say, Lonesome Dove’s cavalier Augustus McCrae wanting to rock in his chair and kick pigs.

In Caleb Carr’s debut masterpiece The Alienist, you can feel the cobblestones and cruelness of the dank streets of New York City. Yes, his trio of protagonists are indelible in their uniqueness, especially Sarah Howard, the first woman hired to that city’s police department. Near the end of the nineteenth century, as forensic science is in its very nascent stages, Carr exceptionally blends fictional characters with actual people, including Theodore Roosevelt. I could argue as fascinating as the arc of each character is, in the novel it is Carr who writes: “the moment in history when the modern idea of the serial killer became available.” Jack the Ripper was already old news across the pond, and the term psychopath was just gathering recognition. It reminds me of the real estate mantra: location, location, location!

The late Richard Adams wrote one of my favorite books from back in the day: Watership Down. Yes, a warren for rabbits was quite an unusual setting. Selling that idea to his publisher must have been quite the discussion: “Rabbits, you want to write a novel about bunnies hopping around chewing on clover?” However, he was on to something; personifying the animals gave him – pardon the pun – a carrot with its stick to hold out to the readership. What on earth can be gained by reading hundreds of pages about leporidae? A lot as it turned out, winning the Carnegie Medal in 1972. However, for me it was Traveller, General Robert E. Lee’s horse recounting The Civil War to his friend in his barn Tom, the cat, that further sold me on the majesty of historical fiction. Already, as someone who yearly taught U.S. History to my fifth grade students, Adams’ 1988 release was timely. I was able to integrate much of the detailed remembrances of the loquacious gray American Saddlebred into my class curriculum. Mr. Ed, take a seat.

I actually could have created one much larger. What would be the point? There are just too many, so I just checked my collection and these called out to me.

Now I ask you: What are yours?

And no, the genre can be anything!

I welcome comments below. Just as much, please submit your own reviews of books you highly recommend! 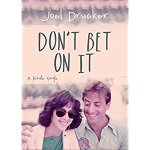 DON’T BET ON IT by Joel Drucker

Bet On It! A Heartfelt, Dignified Love Letter Written By The Author of “Jimmy Connors Saved My Life”

With fine-tuned perception, a voice immersed in an openness analogous to the novella’s core, and with unequivocal, unconditional love—bet on it—Joel Drucker has written a heartfelt valentine not only to his late wife, Joan, but to all of those whom have endured unbearable adversity in all its guises.

Peppered with a generous soul, a sophisticated and silly “helix” of humor that “twines” the couple across the “ends of the earth,” and last, Drucker’s conscious decision to portray Lupis as a medical condition one has but that does not define the individual, readers may easily read this work in one sitting or let it linger over several days to process it.

Though at times one feels the author being sentimental, I take no issue here. This is a love letter, and you just do not neglect the purity of memory, for example, the inside jokes and what Joan described as their “lexicon.” For those who like straight lines and stories ending neatly tied up in a bow, well, you may want to read Lee Child (one of my favorites). Don’t Bet On It portrays what life is: messy. However, our heroine’s ebullience and dignity depicted in a majority of the paragraphs allows the reader to have what I long ago experienced called “Integration Breaths.” These were a lifting of the arms, clasped hands, above your head, inhaling up, exhaling down. Contextually, as I delved into each word and reference through my own lens as a writer, I could almost sense the places in the narrative where Drucker may have thought to himself Hmm, how would the reader be experiencing this now?

Several appearances by tennis legend Jimmy Connors add more literary elements I will only hint at here. Readers familiar with the author are aware of his breathtaking debut, Jimmy Connors Saved My Life (Sport Media Publishing, 2004). We all have our journeys to travel; Connors and Drucker intersect yet again, with one lefty assisting another in facing down grief and loss.

Finally, Drucker is masterful at making connections. Clearly, the author has an infatuation with history and pop culture. My kind of peeps. In fact, he might appreciate knowing that to me, his novella reminds me of Harry Chapin’s bright, yet melancholy song, “Circle” (from Sniper and Other Love Songs, 1972). I found you a thousand times I guess you’ve done the same / But then we lose each other it’s just like a children’s game / But as I see you here again, a thought runs through my mind / Our love is like a circle, let’s go ‘round one more time.

Like Joni Mitchell’s “ink on a pin,” Don’t Bet On It reaches “underneath your skin.” It heals, it educates, it entertains, and most critically, it challenges the way we think about what happens when our loved one is seriously ill. Every day there are unsung heroic men and women around the world who care for that person, whether married or not; in the end, without hubris, Drucker possibly opines: Who really was the hero in our story? To me, it is not an either/or proposition; what’s so, is so, or as Joan would say, Que sera, sera.

Here is a way to visit some literary history and cultural remembrances!

Visit goodreads, search for me, and give it your best shot!

Disclaimer: The photographic images on this site are either from the personal archives of seventiesology or attained from free image sites. For all others, as this is a literary and artistic forum with its sole purpose to entertain and inform, no images are used to generate revenue, therefore, fair use laws apply.