author (n.): The originator or creator of work, especially of literary composition; Someone who writes books for a living.

I amble across a congested room in an independent bookstore to the eye of the literary storm. He, having spoken to an overflowing audience of adulation, greets each individual with a pleasant smile, asking, “Inscription or signature?” Some who lean in make small talk—or attempt to—yet there is a protocol to follow, and a publicist or agent hovering, eager to move the line along.

In the Starbuck’s closest to her home, early on she discovers that the milk-steamer cacophony emanating from the barista station is somehow comforting. High school students arrive at lunch to hurriedly acquire their mid-day brownies or plastic-sealed salads, and drinks with extravagant—and she thinks—pretentious names. Still, she finds their exuberance to be motivational. Taking in her laptop once more, her cursor flashes like a winking Cheshire Cat. What are you looking at? Chapter Seven. This was the one I was worried about. Sleep-deprived, she writes the novel at all hours; in the car, on the phone while talking to her elderly mother who lives in a residential home, during grocery shopping where often she just cannot choose between cereals, and before nodding off, staring at the cottage cheese ceiling in her apartment. Then a man sits at the table closest to her. He smiles at her. She imagines a flyswatter. This is the only thing that distracts me here. Before he can come on to her with a line about his BMW being in the shop or some such nonsense, she flips her laptop closed, rises up, gathers her belongings, and leaves Chapter Seven for the shelter of her Subaru.

Eighteen books now. Quite a series. Does an editor know its trajectory after reading the initial hook for novel one? You have this somewhat broken protagonist. You have heroism in spades. And the villains! Each one crafted artfully—if evil and majesty can be commensurate. Did they stumble onto this success? Was it carefully and cleverly planned? At the Downton Abbey-esque food and beverage station, I am nibbling on a chocolate chip cookie and a sipping from a plastic flute of Perrier. Several excited women—obviously ardent followers—dash by me, pointing at and eagerly discussing one another’s inscriptions. An assistant in charge of the heavy lifting rushes by me with another carton containing what I estimate to be fifty more of the latest best-seller. Between one couple moving from the line and the next group approaching (they appear to be self-absorbed and unconcerned about those behind them), he glimpses me here at his twelve o’clock. Our eyes lock momentarily.

Index cards with a mélange of colors adorn the four walls of her guest bedroom. In ninth grade, her school counselor had suggested to her that based on evidence and discussions with her parents (why didn’t they tell her she pondered), she learned best, visually. Dyslexia was also suspected, however, only a mild manifestation. That might explain why her outlining system took a circuitous and counterclockwise route. As a result, her ending was at one o’clock, where the index card was strikingly blank. Chapter Seven had its first sentence—actually it was dialogue in the form of a question. As someone who compulsively checked her word count, and as a writer of (what she felt to be) highly evocative prose, it was incumbent upon her to manage her penchant to fill pages with setting depictions and the omniscient voice with precise, terse, and equally humorous or moving conversations. On her third cup of coffee, with the late afternoon shadows stretching their arms across the cars along the street below, that’s when it hit her, in fact, slapped her so hard, she was transported to watching Moonstruck at the theater. “Snap out of it!” She stood, legs stiff, stretched her arms, and removed the tape carefully so as not to tear off the cheap veneer of “wood” paneling. She removed the card, grabbed a pen, took five whole steps to reach the living room where she fell onto the leather couch and propped her head with pillows handed down from her grandmother. Reaching for the closest magazine—ironically, Publishers Weekly—she used it for something to write on. A propos she thought. 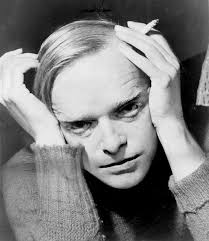 Had to admit, this guy was a gamer. Few remained, and he signed every last book. Since I was in grade school, something about the manner in which I was raised, being the last in line, or the first to volunteer for tasks no one else would do came easy. Toss in that I was obsessed with Sherlock Holmes and other classic sleuths who hung their capes on being observant. Once, a spiritual advisor intuited that over the undulating landscape of time, I was repeatedly a caretaker, in whatever mode that suited the specific era. For example, in China I was a magistrate who oversaw a province, making sure the citizens were fed, clothed, and buffeted from the forces of the typhoon season. In another life, I was a church organist, who provided succor to the flock, with hymnals gifted from the instrument’s pipes. Once I was a Frenchman named Jean-Pierre. My days were spent at a café, much like the scene in Annie Hall, where Woody and Diane are seated in Central Park making hilarious guesses as to what passersby do for a living. My Jean-Pierre was at peace, knew his place, yet he was alone, possibly even lonely. In front of me was a short, cherubic sort, who reminded me of Truman Capote. Perhaps he was a fellow much like Jean-Pierre. Or it was Stratego he played as a child, perhaps Risk. The last ones in line have the opportunity for extended conversations with the author. Me? That was never my intention. I respect their time. I glanced at my wristwatch (remember those?). Noticed store employees beginning to close out registers. I clutched my book, then opened it to the title page, ready to greet him. If only Truman would stop rambling on about Why don’t you let him have a long-term relationship already? Or, for once, can you just allow him to not take on a case and write literature—your devoted fans would stick with you. As he inscribed it, there was just the slightest edge. I interpreted this as it goes with the territory. The kindly publicist (turned out the agent was in Europe for an extended vacation) urged him along. When he asked me what to inscribe I replied, “I believe you know.” Cryptic? Yep. Mildly unconventional? Certainly. However, like I mentioned, he was a gamer. When he gently closed the book, he rose, stretched, and immediately engaged in a discussion with the young woman. That was my cue. In my car, I opened it. Now, that was a surprise.

Her ending was inspired. An avid reader of fantasy and science fiction, her encyclopedia of conclusions and twists found no reference point in other best-sellers. This was audacious. Then, concurrently, the decision would directly impact all of the proceeding chapters. Not much needed to be edited; she had constructed it well. However, her payoff garnered even more weightiness. Was it a gold bullion ingot? Or was it a rusted anchor plummeting to the bottom of the Atlantic. Writers need to be methodical, measured, conscientious of their readers, grounded in the three acts, and do this without the temptation of over-writing, being tangential, taking a turn away from the arc, confusing the reader by switching between first person and the omniscient voice, or moving back and forth through time without making it strategic to the plot and clear. Still, she thought, intuition has its place. Doesn’t all art exist somewhere between derivative and inspired? Recalling the harsh scenes from Whiplash, she permitted the concept of greatness an opportunity to tantalize her. Long ago, she had learned to bury away those insidious thoughts of I want and I need and consciously transformed them into I will. In the same moment, she looked life in the eye and realized no one truly has control over ambition; we do, however have control over what we have for dinner. Scrawling on the lines, opening and closing her eyes, what had eluded her for months presented itself to her entirely without warning or some sort of precipitating event. Just neurons and axons firing away. This will do for now. It wasn’t long before she entered into a deep, soundless slumber only Snow White might relate to well.

Beneath the overhead lights in my trusty Acura, in bold black ink above his signature, he had written, “To Sam, My fellow author, may you find success in all of your future endeavors. To quote someone that inspired me, Peter Gabriel, ‘Don’t Give Up.’” Yes, I knew the song well, and the remarkable music video with Kate Bush. Giving up was not in my vocabulary. When I returned home, there were reports to write. Kitchen was a mess. If I didn’t get a jump on the presentation, my weekend ahead would be torture. Keep your day job . . . at all costs. Panels upon panels proscribed this like a new innocuous medicine being pedaled by Big Pharma during Jeopardy commercial breaks. Mine paid well. I had all the job security that someone my age—particularly someone divorced with alimony my age—could not even consider placing in peril. Would someone tell me why there are not thirty hours in a day? That’s all it would take, really. Not asking for much. Imagine the possibilities. Get a grip. Okay, I’ll do the most complex report, get that out of the way, then fine tune places I’ve demarcated. Yet, last week over beers my younger brother reminded me, “What possibly can you be waiting for?” He was right. My strategy’s in place. Same with my platform. Writing groups. Beta reader. Manuscript tightly polished. My belief, entrenched. Cue the Cornelius Brothers: “It’s Too Late to Turn Back Now.” Just last night, with a few friends over dinner, one asked me, “When did you really know you wanted to be an author?” To which another quickly commented to her, “He’s not an author until he’s published.” It continued on from there. Debate’s conclusion? It truly is rhetorical. One might argue that putting pen to paper is all it takes. Oprah might say otherwise. Or Pub Weekly. I argued what drew the most consensus: How hard are you working at it? Is it all-consuming? Do you have a plan? Do you network? And as I pointed out, do you believe in your work? Steinbeck was once unknown. Hard to imagine. “The writer must believe that what he is doing is the most important thing in the world. And he must hold to this illusion even when he knows it isn’t true.” I could say it even better myself.

2 thoughts on “I Write, Therefore I Am an Author By Gavin Lakin – Post 8”